I Have Thoughts About the “Freedom March” 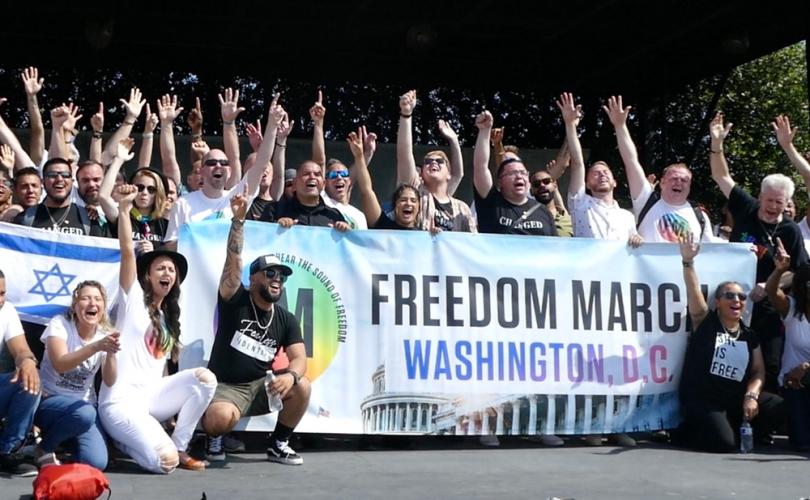 Perhaps you’ve seen this image around Facebook in the last couple of days. 200 EX-LGBT MEN, WOMEN RALLY TO SHOW FREEDOM THEY’VE FOUND IN FOLLOWING JESUS, the headline eagerly proclaims. I’ve seen this article shared on the The Evangelical Covenant Church page a lot recently as proof that “people can change” if we just surrender to Jesus. Sweet, well-intentioned friends of mine have shared it with me in the hopes that I will “find freedom” myself. But as happy as those “ex-gay” people look, I don’t think their “freedom” is as real as they would like you to believe it is. In fact, I used to be “ex-gay” myself. I have thoughts.

Let’s talk about it.

I remember the days when I would have enthusiastically jumped into that picture and proclaimed myself “ex-gay” too. I was convinced that God was healing me, taking away my “same-sex attraction” and helping me to “find my identity in Christ.” From 2002 to maybe 2009, I was convinced that to identify as gay or to be in a same-sex romantic or sexual relationship was sinful, and I went to great lengths to try to conform myself to that understanding of reality, unfortunately doing a lot of harm to myself and others in the process.

Honesty is so important to me and to all Christian people. I have some concerns about the veracity of this article, if I’m honest. I watched a lot of the livestream video, and I have a hard time believing 200 people were there. Even in this group photo, there are only maybe 50 people, and that’s being generous. For most of the video, there are only like 20 people even visible. My friend Michael Bussee, one of the founders of Exodus International, recently posted – about this very rally – “It should be noted that not all of these people were necessarily LGBTQ people who had claimed to ‘change.’ Some were probably friends of theirs or people who attend their church. When the first Exodus conference was held in 1976, it was reported that ’66 former homosexuals’ attended. True we had that many people attend, but most of them were straight people from Melodyland who supported our ministry. In fact, only about 15 people at the first conference identified as ‘ex-gay’. The other people were just there to observe and cheer us on.” I think 200 is a generous estimate of the crowd size, and I think the number of people claiming to be “ex-gay” was probably closer to fifty.

And again, language is an issue. One can identify as “ex-gay,” but I really do wonder whether that means that they no longer feel romantic/sexual attraction to the same sex, or simply that they have chosen to deny/ignore that attraction and call themselves by a new name. As a former “ex-gay” man myself, I can testify that even in my most convinced times, I still felt powerful romantic and physical attraction to men. I just denied it.

Look at the language in the article itself:

“They proclaimed the freedom they’ve found in abandoning homosexual and transgender practices.”

“Colon explained that the true meaning of deliverance and freedom is being able to look at temptation in the eye and say, ‘I don’t want you, I want Jesus.’”

“‘That’s how you know you are free,’ he added. ‘Our identity is not in our sexuality; it is in Jesus Christ.'”

Not one word about real change of orientation. It’s all about language and behavior. OF COURSE you can say you’re “ex-gay.” OF COURSE you can choose not to be in romantic or sexual relationships with same-sex partners. This, my friends, does not mean you’re not gay anymore.

I could go on and on, but I’ll end it there. I believe that God loves AND accepts me as a gay man. My identity AND my relationships are holy and good. And I will continue to preach this message of love and inclusion as long as God allows.

If anyone reads this and needs to explore the relationship between their Christian faith and their LGBTQ+ sexual orientation or gender identity, I invite you to check out my website at mattnightingale.com or visit The Christian Closet on Facebook or at thechristiancloset.com. ❤️