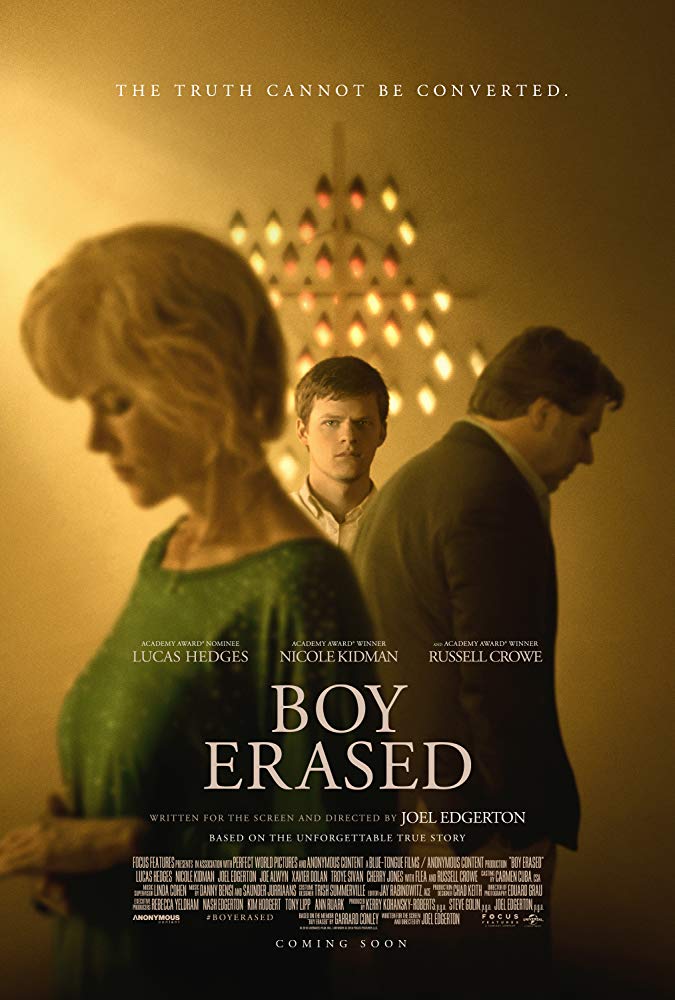 Last night I went to see the new movie Boy Erased, based on the memoir of the same name by Garrard Conley. Many of you know that I share a similar story of attempted “conversion therapy” and have asked for my thoughts. I highly recommend the movie, and I hope many people will see it. I think it has the real potential to change hearts and minds. As the stats at the end of the movie remind us, 700,000 Americans have been subjected to conversion therapy and over 20,000 Americans are currently affected by this abusive practice.

I thought one of the strongest things about the movie was its compassionate portrayal of Conley’s parents and their church community. As I often remind my liberal/progressive friends, not all conservatives are evil or stupid. I honestly believe that 99% of people are simply doing the best they can given their understanding of reality. While I really do believe that non-affirming theology and practice is wrong and harmful, I also really believe that most people holding these beliefs genuinely love people and want the best for everyone.

I loved the portrayal of prayer and worship. The scenes where people were fervently praying for each other or singing in college worship services felt very authentic, not just caricatures of prayer and worship as we so often see in movies. I have prayed words just like that, sung songs in settings just like that. These scenes will ring true to church people or former church people. They reflect reality. They are respectful. I really appreciated that.

The filmmakers obviously took liberties with Conley’s story. In all my personal experiences with “ex-gay” ministry, I never saw the extreme behavior displayed in the movie. No one was ever physically restrained. No one was ever hit with a bible. No one was ever submerged in a bathtub. And there was a scene where the leader of the group tells a boy that if he doesn’t surrender his sexuality to God, God will not love him. That idea – that conservative Christians believe God doesn’t love gay people – is, to be honest, a straw man. I have never actually met anyone who believes that. Most conservatives believe that God loves gay people SO MUCH that he wants us to live free from the “bondage” of homosexuality. And I believe that if we are to win hearts and minds in this debate, we have to be committed to telling the truth about the people on the “other” side.

One of the most powerful and sad scenes for me was when Jared (Conley’s character in the film) has an intimate moment with an art student named Xavier. They don’t kiss. In fact they barely touch as they lie on Xavier’s bed together. But the romantic yearning between them is palpable and beautiful. This longing for love and connection – even if it is not consummated – is considered so ugly and damaging that Jared has to confess it in his “moral inventory.” I remember being taught that my sexual desires for men were broken, sure, but they were no worse than a straight man’s lustful desires. What was REALLY dangerous was that desire for tenderness, for love, for relationship. That’s what I was made to feel most ashamed of. Now, of course, I understand that my desires for tenderness and love are so natural and good. Most people have a built-in, beautiful desire for connectedness and intimacy. It’s something to encourage, not to shame.

I loved the scene where Nicole Kidman, as Garrard’s mom, basically chooses him over her husband’s theology. For me, that’s where the tears really flowed. It was beautiful. Something about a mother’s love is so powerful. And when LGBTQ+ people are our siblings, our friends, our moms, our sons… Somehow that has an amazing effect. We become people to be loved rather than issues to be solved. Representation matters so much, and that’s one of the reasons I have chosen to be so vocal with my own story.

When I first came out, in 2002, I acknowledged “same-sex attraction” and confessed to a long-ago, one-time sexual encounter with a male friend. But I didn’t come out to live openly and authentically as a gay man. No, that wouldn’t come for another fourteen years. At the time, I had far too much to lose. I had been married – to my best friend, a really wonderful woman – for eight years. I was father to four precious children who I loved with all my heart. I was 30 years old and the full-time worship pastor at a large, influential Evangelical church on the San Francisco Peninsula. So I came out – to my wife, to some close friends, to my church leadership. I came out to be healed. I came out to be forgiven and free. I came out to become straight, or at least straight enough.

Spoiler alert: It didn’t work. Conversion therapy is pseudoscientific nonsense. It does irreparable damage to the souls of LGBTQ+ people as it tries to literally erase a central part of our identity. So many of us are still trying, years later, to find ourselves, to heal from the lies we were told, to find our places in the queer community which was so misrepresented to us by leaders in whom we placed our hope and trust.

My own attempts to cure my homosexuality included lots of one-on-one counseling with Christian MFTs and years of twelve-step work in sex addiction recovery groups. (I’m not a sex addict. I’m a normal gay man. But at the time I really thought I was.) My former wife and I did couples therapy together, including two separate week-long therapeutic retreats. And of course there was a ton of prayer and talking and reading and journaling on my own. The most intense conversion therapy I did was through a group called Living Waters. It was a program from a ministry called Desert Stream Ministries/Living Waters, founded by Andrew Comiskey, who – to this day – continues to identify as “ex-gay” and is a leader in the post-Exodus Restored Hope Network along with other convinced ex-gays like Stephen Black and Anne Paulk.

Living Waters was, for me, a beacon of hope. For the first time, I was being honest about my attraction to men. I was telling the truth about my thoughts and behaviors, and I was not finding condemnation. Quite the opposite. I was finding unconditional love. I was finding camaraderie. We were a group of 20 women and men who struggled with all kinds of “sexual and relational brokenness.” Gay and straight, men and women, older and younger. What brought us together was our shared conviction that we could be healed by surrendering to Jesus. And I have to be honest. Those 9 months were mostly profoundly meaningful to me, and I will always value the actual good that I found there. But of course now I know now that the foundation was rotten. The lie that LGBTQ+ people were broken and in need of healing. The relentless pursuit of something that could never actually happen.

I hope you see Boy Erased. I hope millions of people see it. And I hope that you will join me in speaking out against this harmful practice that has affected so many of us over the years. I’m grateful that it’s 2018 and that the world is finally waking up. Thanks so much for reading. As always, I welcome your comments – from all perspectives. 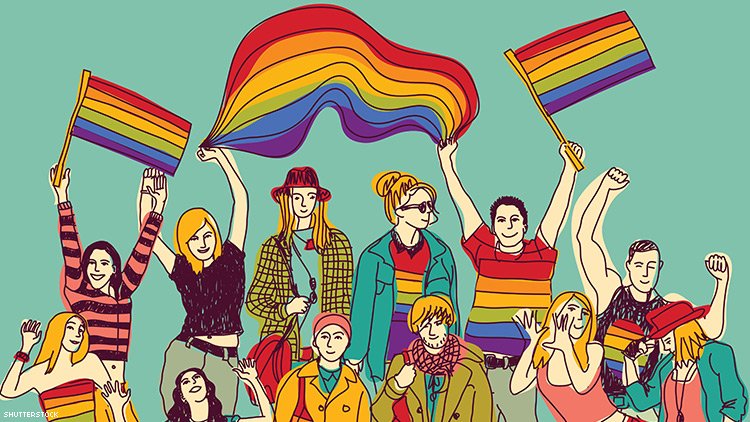